A new deal for the rivers and waterways of Melbourne’s west: law and policy reform for waterway protection and new models of urban design proposes legislative and policy reforms for the protection and repair of the rivers and creeks across Melbourne’s west. These reforms emerge from of a series of collaborative workshops considering issues and visions for change in urban (and peri-urban) waterway protection – a process building on a campaign for protection of the Yarra River and consequent legislative reform.

The proposals contained in this report focus on potential legislative arrangements across a complex geographic and policy landscape, tied together by clear preferences for strengthened protection and deepened resilience of urban green spaces in Melbourne’s west, of which waterways are the focal point. These waterways are essential, but not isolated, green infrastructure, which unfortunately continue to be degraded and neglected.

These proposals contribute to a new way of seeing how Melbourne and surrounding towns can better care for waterways, with the aim of mechanisms contributing to the emerging, greener and more human approaches to urban waterway management.

Read A new deal for the rivers and waterways of Melbourne’s west: law and policy reform for waterway protection and new models of urban design 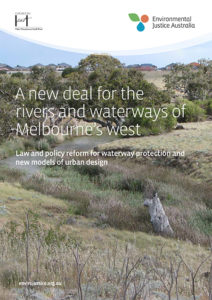