Waste not, want not: Opportunities for the NSW Government to deliver for communities impacted by coal ash 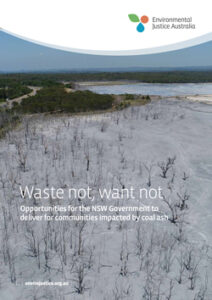 For the past five years, there has been a growing awareness of the significant contamination risks presented by NSW coal ash dams and the failure by both government and industry to properly manage these risks. This has resulted in an increasing number of reports documenting the environmental impacts of coal ash from NSW power stations and the existing failures of coal ash regulation and remediation.

Sustained campaigning by community environment groups and Environmental Justice Australia led to the NSW Legislative Council announcing an inquiry into coal ash waste in October 2019 (Inquiry). This was a significant win for affected communities and advocates, who finally had the opportunity to shine some much-needed light on the opaque coal ash regulatory regime and obtain clarity and understanding of how the NSW Government, regulators and industry manage coal ash waste both now and into the future.

From February 2020, the NSW Public Works Committee (Committee) inquired into the costs of remediating coal ash dams at Mount Piper, Bayswater, Liddell, Vales Point and Eraring power stations. As part of the Inquiry the NSW Government acknowledged that contaminated sites such as coal ash dams ‘may threaten human health and the environment, limit land use or increase development costs’.

The Committee’s Final Report was released on 22 March 2021 and made 16 recommendations all of which Environmental Justice Australia broadly supports. The NSW Government must respond to the findings and recommendations contained in the Final Report by 22
September 2021.

This paper outlines how the Government should implement four of the 16 recommendations deemed to be most critical to securing tangible, measurable outcomes for the community, to ensure best-practice assessment of the environmental and human health impacts of coal ash dams and best practice community engagement in the ongoing management and remediation of coal ash dams.