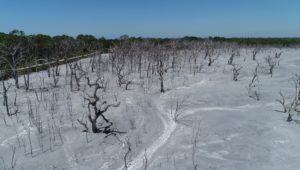 Little attention is paid to the legacy contamination risks posed by ash waste from coal-fired power stations. Ash ponds, or ‘ash dumps’, are a neglected aspect of the coal combustion process. Ash dumps contain the waste ash (also known as fly ash or coal ash) from the coal combustion process. This waste is delivered to a storage facility, usually by pipe, to an above ground pit near the coal-fired power station. In the case of the Latrobe Valley power stations, these pits are inside worked-out sections of the brown coal mines. It is estimated that Australia produces 13 million tonnes of ash waste annually from coal combustion.

Read EJA’s supplementary submission in response to the Senate Standing Committee on Environment and Communications’ inquiry into rehabilitation of mining and resources projects as it relates to Commonwealth responsibilities (varied terms of reference regarding the rehabilitation of power station ash dams) below.