What the NSW election result means for air pollution 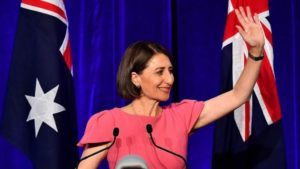 After a cliffhanger election in New South Wales, the Berejiklian Liberal Government has maintained government in the state. So, what does this mean for air pollution in NSW?

Air pollution control is primarily the responsibility of state governments who are largely failing in their responsibility to keep our air clean and protect community health. Australia’s biggest polluters are poorly regulated and continue to pump dangerous toxic pollution into the air and cause serious health impacts for our communities.

We were hoping that this state election, we would see a race to the top on cutting air pollution. While we didn’t see that from both parties, in the weeks prior to the election the Labor Opposition committed to 5 air pollution actions consistent with what we’ve been asking for.

These commitments would have gone a long way to upholding environmental justice in NSW but the Coalition were returned to office with no commitment to clean up the state’s air.

Premier Berejiklian appears set to announce a new team and we’re looking forward to working with the new environment and energy ministers in NSW and hearing what they intend to do to control toxic pollution.

We’ll be pushing for the renewed Berejiklian Government to force coal-fired power stations to clean up their act and to improve regulations to protect community health.

And with, an upcoming federal election, we’ll turn our sights to pushing for change at a national level to keep our clean and our communities safe. The federal Labor party has committed to re-establishing a national environment protection agency with pollution control powers so watch this space!

For now, our focus is on persuading state governments and EPAs to exercise their pollution control powers. And to continue working with impacted communities and a growing network of community groups and health experts who share our concern. We’ve had significant impact so far, prompting an audit of power station pollution licences in New South Wales and several investigations and prosecution for pollution incidents and we intend to keep building on that. Pressure is mounting in Victoria for stronger pollution licences for the Latrobe Valley’s three brown coal generators as we wait for the completion of power station licence reviews. Stay tuned!