At our recent AGM we paid tribute to former Chair of Environmental Justice Australia, Megan Utter. Read the remarks given on the night below. 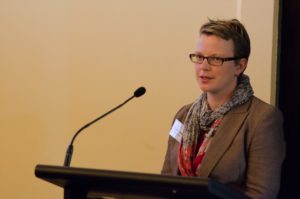 Megan Utter joined the board at our AGM 10 years ago in 2009.  She soon became deputy chair and then took over as chair in 2010.

Megan’s support for the work of EJA (and formerly EDO Victoria) actually predates her board service.  Brendan advises that prior to his commencement with the organisation 15 years ago Megan, then a solicitor with Phillips Fox, provided extensive pro bono support to EDO Vic and Environment Victoria during the period of major reforms to Victoria’s Water Act.  This commitment continued with Megan as Pro Bono Coordinator at her firm securing a series of secondments to EDO Victoria over several years which were crucial to our growth and increasing impact.

During her time as Board Chair, Megan has continued to play an invaluable role, supplying steadfast support and leadership to the organisation as we have grown and expanded, weathered the impact of precipitous withdrawl of Commonwealth government funding in 2013 and then re-launched as EJA in 2014.

Our board has had surprisingly few chairs in the 27 years since our founding, with chairs including Simon Molesworth QC and Professor Murray Raff providing long and distinguished service. Megan now joins them as former chairs each of whom can look back proudly on what was achieved under their leadership.

We thank her (and her family!) for the time dedicated to EJA and our mission and wish her well for the future.

EJA is currently seeking a replacement chairperson, read more about the role and learn how to apply here.