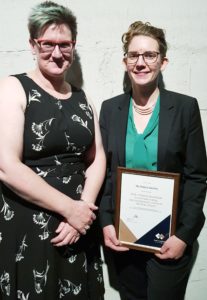 We are thrilled that our Senior Lawyer, Danya Jacobs, is this year’s recipient of the Mahla Pearlman Award for the Australian Young Environmental Lawyer of the Year.

The Mahla Pearlman Award for the Australian Young Environmental Lawyer of the Year is awarded to a young lawyer who has made a significant contribution to environmental law. Each recipient has carried out extra work giving back to the legal community as well as to the community at large.

Danya works primarily on biodiversity and nature protection, with a focus on public lands, forests and threatened species. Her practice involves litigating on behalf of community groups to promote conservation objectives, as well as acting in criminal law matters for individuals charged whilst protecting logging in Victoria’s native forests. Prior to starting at EJA she worked at Bleyer Lawyers, where she worked on similar issues.

She is currently working on two significant court cases, both of which have the potential for national implications for forest protection and biodiversity.

The first of these cases, brought on behalf of the Fauna and Flora Research Collective, was heard in the Victorian Supreme Court in December 2018 and January 2019. Judgement is pending. The case alleges that the Environment Department has not protected the minimum area of old growth forest required by law in East Gippsland, and that until it does, such logging is illegal. It therefore has the potential to protect all remaining areas of old growth forest in East Gippsland.

A further case, brought on behalf of Friends of the Leadbeaters Possum, seeks a Federal Court order to stop logging in 34 forest coupes in Victoria’s Central Highlands that are home to Greater Gliders and Leadbeater’s Possums. It also seeks to protect additional forests to mitigate for 32 sites alleged to have been unlawfully logged in the past. The case is scheduled to be heard in June. If it is successful, it could stop logging in these critical areas of the Leadbeater’s and Greater Glider’s habitat, help save them from extinction, and set a precedent for how native forests are managed nationally.

Additionally, Danya works very closely with numerous environmental community groups, including those mentioned above, to educate them about relevant legal frameworks and to empower community groups and community scientists to do the on-the-ground monitoring necessary to ensure that the relevant provisions relating to native forest logging are being complied with, and to identify and highlight the breaches that occur.

We are so lucky to have Danya on our team at EJA!