An update on our campaign to cut air pollution

Our air pollution team has been busy of late, working with communities on the ground affected by coal pollution, advocating for pollution controls at the state and federal level, and growing community support for the campaign for clean air. The meetings were productive and we were pleased with each parliamentarian’s willingness to act on the health burden of toxic pollution from NSW coal-fired power stations. 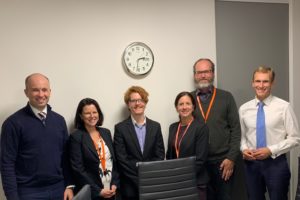 Our key recommendations to the government included:

2.Finalise the review of the NSW Load-Based Licensing scheme and set pollution fees for toxic pollutants that reflect the health costs and that encourage companies to reduce pollution.

3.Finalise and implement the NSW Clean Air Strategy in 2019, with effective stakeholder involvement during the implementation phase and ongoing review.

We are hopeful that we can work collaboratively with NSW Parliamentarians to facilitate action on these issues. We’ll seek follow-up meetings in a few months and update you on the progress we make.

Australia’s first national air pollution standards were adopted in 1998. Now, after 21 years, the standards for oxides of nitrogen (NOx), sulfur dioxide (SO2) and Ozone (O3) are being revised.

Coal power stations and vehicle emissions are the biggest sources of SO2 and NOx in Australia. There is no safe level of exposure to these pollutants and there are harmful effects from exposure at levels well below the current air quality standards.

Stronger air pollution standards may require stricter pollution licences and controls for many of Australia’s coal-fired power stations and vehicle fleets. This would result in significant health outcomes for Australians. For example, research for the NSW Government suggests that eliminating NOx and SO2 pollution from the five NSW power stations alone would prevent the loss of 50,000 years of life in Sydney each year.

What is the process for getting better air pollution standards?

The review process involves the Environment Ministers from all nine Australian state, territory and Commonwealth governments.

Environment Ministers are likely to come together in late 2019 to make a decision whether or not to vary the standards. From our experience, the decision is very political, and not necessarily based on the best science or the need to protect the environment and human health. This makes it even more critical that Ministers see widespread public and expert support for best practice standards.

A two thirds majority vote (six out of nine Ministers) is required for new standards to be adopted. In practice, a unanimous decision usually occurs, with some jurisdictions being more influential than others.

Our experience is that for a stricter standard to be adopted, at least one Minister must champion that standard. But we will also need to recruit other Ministers to support them.

We’ve done this successfully before.

When the national air pollution standards for particle pollution were reviewed during 2015, EJA and allies submitted hundreds of submissions and communicated directly with the nine environment ministers. This direct communication resulted in the Victorian and ACT ministers advocating the adoption of stricter standards.

What are we asking Ministers to do?

Our goal is for Ministers to set international best practice standards that align with the World Health Organisation guidelines for ambient air concentrations of sulfur dioxide, oxides of nitrogen and Ozone.

What can I do?

EJA will support individuals and groups like you to participate in the review and advocate for stronger air pollution standards.

The key actions you can take include:

We are hosting a health experts forum together with the Lung Health Research Centre at Melbourne University on Thursday 20 June and a public forum for community members on Tuesday 2 July at our office building in Carlton.

We will also be hosting similar forums in Sydney, Brisbane and the Central Coast.

The Impact Statement and Proposed Variation to the national standards were released today. The EJA team is currently analysing the 150-page documents for their scientific and health research, and assess the recommendations. We will be meeting with the Victorian EPA on Monday to discuss these in more detail and updating them on our plans for community involvement in the review process. More to come soon!

On Tuesday 28 May, EJA is hosting a community forum for Moe and Newborough residents concerned about the ash and dust coming from Yallourn power station. The forum will focus on the legal rights of residents to enforce compliance with Yallourn’s legal obligations to protect community health and wellbeing. Many Newborough and Moe residents have voiced individual concerns to EJA about dust and ash they believe is coming from the Yallourn power station. You can find more details on the event here.