On Monday 20 May, the EPA released an air quality update warning residents of the Latrobe Valley that air quality in Moe was going to be unhealthy for all, and in Churchill, unhealthy for sensitive groups. The warning says nothing about the cause. The EPA hasn’t said anything about protecting the community.

A thick toxic haze of smoke has settled in to the Latrobe Valley. Residents have complained on social media about having headaches or migraines that last days, running eyes, needing to wear a face mask to go outside, difficulties breathing, and a horrible smell they can’t escape. This smell, according to residents, isn’t just bushfire – there’s a toxic smell that seems to be coming from the Maryvale paper mill.  Residents feel let down by the EPA. Why isn’t protection of their health being given priority?

There are a number of significant sources of air pollution in the Latrobe Valley – three large coal-fired power stations, the Maryvale paper mill, and the open cut coal mines to name a few – but this week’s spike in pollution levels is caused by yearly logging coupe and plantation burns, fuel reduction burns, and private land burn-offs.

Fine particle pollution, or PM2.5, is an extremely harmful pollutant for which there is no safe exposure level. The EPA’s air monitor readings showed PM2.5 readings of up to 67.4 micrograms per cubic meter in Newborough – nearly three times the ambient air goal for PM2.5. The Latrobe Valley Intelligence Network – an independent environmental monitoring system – showed that some areas of Latrobe Valley had levels of fine particle pollution levels at over 365 micrograms per cubic meter, nearly 15 times higher than State goal for ambient air quality: 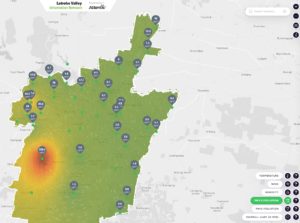 The EPA can and should do more. The community has every right to feel let down if they don’t.

Much more biomass is burned in logging coupe burns than fuel reduction burns, generating much more air pollution. This air pollution is generated by private operators for private financial gain at the expense of community health. However the EPA does not even acknowledge that logging coupe burns are happening, only mentioning fuel reduction burns in its communications. This make the community feel that the burns are inevitable and they have to put up with the pollution for their own bushfire safety. Most do not know that significant amounts of pollution at this time of year are from commercial activity that has nothing to do with their safety.

Air pollution from logging coupe burns is industrial pollution and should be regulated by the EPA as such.

No one’s health should be put at risk from preventable pollution.

You can take action by signing the petition calling on the EPA to crack down on pollution.